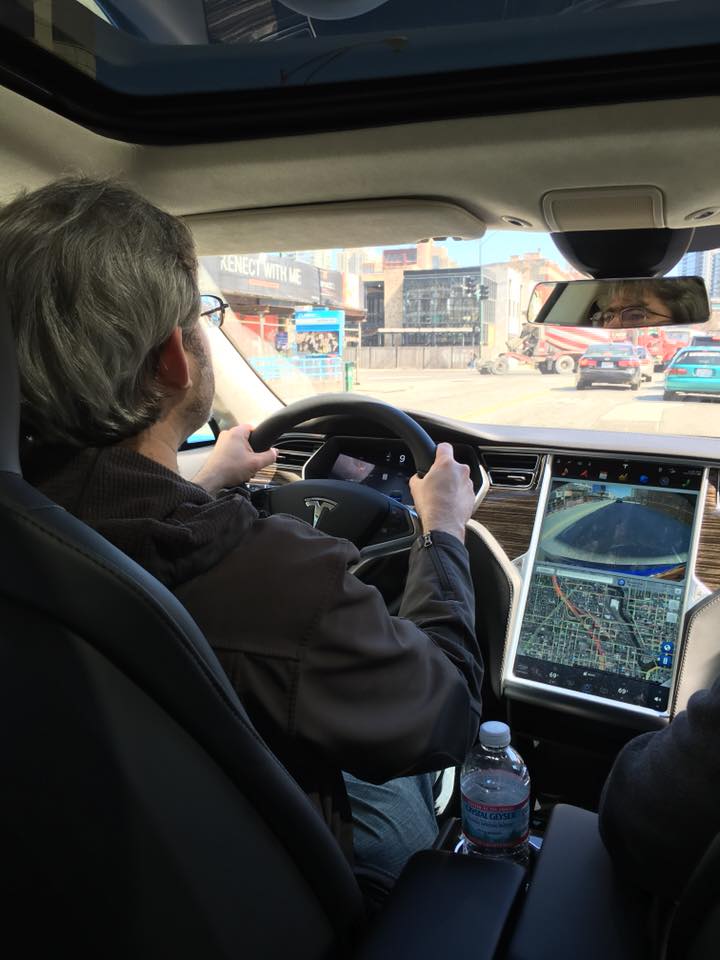 This past week, I had the opportunity to test-drive a Tesla.

Tesla has been on my radar for a few years now. I’m not much of a car person, but their cars are just really cool and I’ve been considering preordering the model 3, so I took advantage of a trip to Chicago to check out the S.

Overall, there were a few things that I didn’t like about the car. It’s pretty low and isn’t as easy to get into and out of as it could be (and it doesn’t feel as roomy as my Camry). There are no grab bars, but that can be fixed with aftermarket add-ons. The windows are narrower than I like, which cuts down on visibility – but the large screen showing what’s happening around you more or less makes up for that. Overall, the car feels comfortable enough, though not like anything particularly special.

The driving, though, is something else. The handling on this car is pretty solid, and I liked how quiet it is. Chicago traffic meant I never got it up above 35, but I’d love to see how it handles curves at freeway speeds. What little acceleration I was able to do was pretty smooth. I liked the regenerative braking, and I can definitely see why some people make a game out of never using the brakes.

The most interesting thing was probably the autopilot. I engaged it while sitting on the freeway on-ramp and the car immediately accelerated at the car in front of me, only to stop again seconds later – that was a little disconcerting! When that car tried to change lanes a few minutes later, without us having gotten up enough speed for the S to navigate off the lines instead, I had to retake control to keep us from changing lanes as well. The warning beep made it very clear that my attention was needed.

As I said, I’ve never been a car person, and I’ve definitely never considered spending good money on a luxury car. The point of the test drive was to see what Tesla’s work felt like so I could decide whether I’d like the model 3, which comes in at a much more reasonable $35k (before the $7500 tax credit).

But the more expensive versions sure seem awfully appealing…